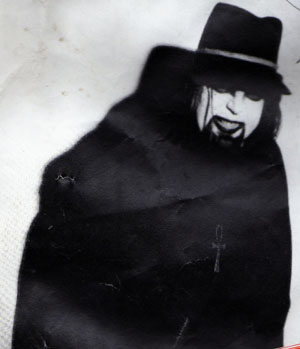 In 1993, Thomas Mundahl knew that his music career was over. He was getting older and his already almost 10 years playing rock in roll (in North Dakota, and Minnesota) was taking it’s toll. In 1993, destitute, broken, and burnt out, he came to the realization that he in fact was a failure.  Then almost by magic, he came to the realization that the story of his life and failures in the rock n’ roll industry and the art world would make a great comedy. This is when The Reverend Poky Bunge was born.

The original first cassette and comic strip were intended to be a one off. Tom had no intention of continuing the act , or having it become a full band. However at an invite from a friend to have his band open for them (All Flesh featuring Billy Fisk who would become the almost ten year drummer and co-song writer for  R.P. Bunge), Tom decided to create a band out of his bizarre rock and roll peformance art personality.

Since then there have been many lineup changes, with member joining and leaving, and in some cases, joining again briefly and then leaving for good. Some of the people that have played in the band include Erik Freitag the infamous Twin Ports area muscian famous for his local bands SIC, and now Jaundice.  Other key members over the years have included Pat Vosika, another infamous rock and roll  crazy man, Kurt Coykendall the loud shredding metal guitarist for early grindcore band Shredfit, and Tiffany Teeche, the  graceful swan who is now a dance instructor in the Minneapolis area. Other members in the past have included Tom’s life long friend Steve Trull (the original guitar player), Paul McFarland (drummer and guitarist extraordinare), Tom Sietsma (keyboardist virtuoso) and Roger Peitso (local bassman of the Minneapolis Westbank blues rock scene).

Reverend Poky Bunge has gotten mixed reviews over the years, with the bulk of their appreciation coming from comedians, the local metal community, and fans who understand (and are not offended) by the musicial parody.  In 1998 they were signed to local metal label Root of All Evil Records, and in 2000 they released one of the most sonically bizarre heavy metal albums of the twentieth century “Butt Outta Hell”. The album sold poorly, but it put Reverend Poky Bunge on the map as one of the main originators of the musical genre known as “tardcore”.

Today the band enjoys cult status, with fans all over the world still listening to the music.